The Sales Funnel is not Dead!

Any buzz in the upper echelons in marketing is often accompanied by more theories than one would expect after a particularly piquant episode of Game of Throne. One of the hottest discussion making its round in the upper stratum is totally focused around an endless discussion about whether the proverbial Sales Funnel is dead. With all the researchers proclaiming about the death of Sales Funnel, it is understandable for any business owner to get overwhelmed. After all, Sales Funnel is the oldest and most illustrated marketing paradigm and any business owner worth their salt have used sales Funnel some or the other time. So does it mean sales funnel has passed on? The resounding answer to this question is “No!” The Sales Funnel is not dead but has just progressed to suit a new medium, arena and audience. The funnel is a blueprint or a metaphor, with buyers at the top and even at the bottom of the funnel and as business owners, we want to move them through. Forsaking a tried and tested blueprint to guide the prospects through to a successful sale is shortsighted to say the least and may lead to consumer chaos.

In the digital age, the world of sales has transformed. The transition of a customer from interest to purchase is not straightforward anymore because fundamentally the buying process has changed. Today the consumer is no longer at the mercy of salespeople. They are not ill-informed like before, rather, they are better informed and empowered. They come in and out at different stages of sales funnel, sometimes just researching and going silent for long, before they want to purchase. With such erratic and unpredictable buying pattern, the traditional sales funnel is no longer relevant. However, to the anti-funnel researchers claiming that the sales process is non-linear, the non-linearity should not be misperceived layering the core objectives of marketing. The sales funnel is basically a simple and intuitive metric-driven hierarchical tool used for visualizing core marketing outcomes. Although unlike the traditional sales funnel where the leads went in at the top, with sales coming out from the bottom, today’s sales funnel look more like sieve wherein the leads leak out all through the journey. However, that doesn’t mean all the leads get lost, it just means that even though leads could go silent for a long period, they could return in a completely different stage altogether and come out of the funnel as a successful sale.

So what is new?

Basically, the top down stages of a traditional sales funnel remain unchanged, nor does the exact shape of the funnel has changed much. So what is new? In the new Sales funnel paradigm, marketing has a much stronger role to play. Marketing can no longer just remain on the sideline drawing the lead into the sales funnel and letting the sales team take over. In the new sales funnel, marketing follows the lead into the funnel through each step. The new kind of funnel is much more fluid and here the consumer guides the sales process instead of you guiding them. 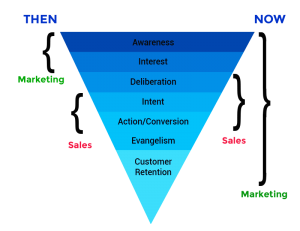 The evolution of the Sales Funnel just proves that change is essentially a good thing. The new Sales funnel allows for a better collaboration and communication. To keep the leads from slipping over, the sales funnel needs to be ‘marketing enabled’. You need to be in touch with your consumer without intruding and be able to continuously adjust to meet their demands. Still not convinced on how you can create a sales funnel exclusive to your industry that works? Get in touch with us now!

With over 12 years of expertise in the IT Industry, Carmatec has carved out a niche for itself to become an enterprise class solutions provider. With stringent quality control measures, best practices and excellent crew, Carmatec provides best solutions at nominal rates. Carmatec’s portfolio of services is in line with the changing trends in the industry and, encompasses the latest technologies and best of talent.

Aromal Rajagopal is a serial entrepreneur who has served as the founder and co-founding member of six successful businesses. Considered as a strong leader with a remarkable strategic vision by clients and associates, Aromal is able to convert business goals into reality. Aromal serves as an entrepreneurial change agent strategically positioning the organization to maximize stakeholders’ value.

QatarCarmatec is counted among the top website designing companies in Qatar that has 18+ years of experience in creating the visual identity for people, brands and companies with the best responsive web design services in Qatar.

﻿
We use cookies on our website to give you the most relevant experience by remembering your preferences and repeat visits. By clicking “ACCEPT ALL”, you consent to the use of ALL the cookies. However, you may visit "Cookie Settings" to provide a controlled consent.
Cookie SettingsREJECT ALLACCEPT ALL
Manage consent

This website uses cookies to improve your experience while you navigate through the website. Out of these, the cookies that are categorized as necessary are stored on your browser as they are essential for the working of basic functionalities of the website. We also use third-party cookies that help us analyze and understand how you use this website. These cookies will be stored in your browser only with your consent. You also have the option to opt-out of these cookies. But opting out of some of these cookies may affect your browsing experience.
Necessary Always Enabled
Necessary cookies are absolutely essential for the website to function properly. These cookies ensure basic functionalities and security features of the website, anonymously.
Functional
Functional cookies help to perform certain functionalities like sharing the content of the website on social media platforms, collect feedbacks, and other third-party features.
Performance
Performance cookies are used to understand and analyze the key performance indexes of the website which helps in delivering a better user experience for the visitors.
Analytics
Analytical cookies are used to understand how visitors interact with the website. These cookies help provide information on metrics the number of visitors, bounce rate, traffic source, etc.
Advertisement
Advertisement cookies are used to provide visitors with relevant ads and marketing campaigns. These cookies track visitors across websites and collect information to provide customized ads.
Others
Other uncategorized cookies are those that are being analyzed and have not been classified into a category as yet.
SAVE & ACCEPT