HARNESSING THE POWER OF IoT FOR

The proposed solution consisted of the applications below: 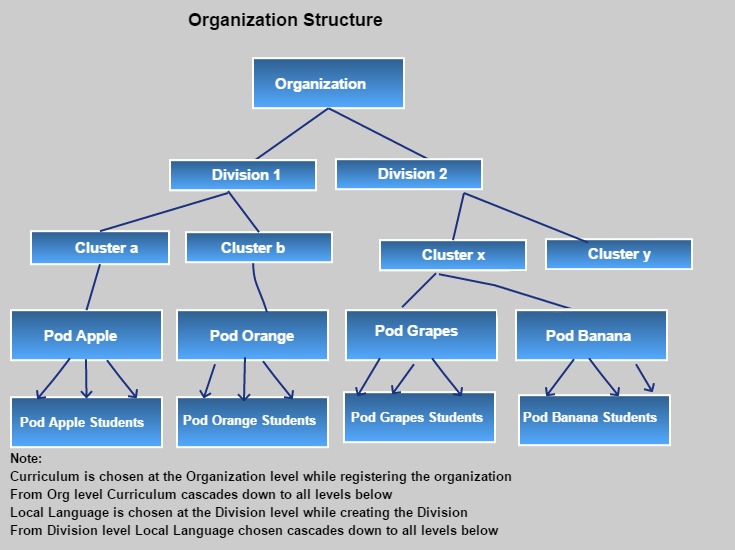 In the structure depicted above, the organization and the division levels are handled by the cloud application.
Carmatec proposed to develop the back-end web application using LAMP framework. LAMP framework is built using Linux, Apache, MySQL and PHP. Custom PHP platform with HTML as the front-end and MySQL as back-end. PHP is used to design any type of application and is scalable. It can be run on all major operating systems including Linux, UNIX, Mac OS and Windows as long as the backend server is on a LAMP

Carmatec proposed to develop a “Master Android Application” which would be used by a cluster of organizations. Master App syncs only the content needed for that Cluster’s Curriculum and the Local Language. After the master app has collected information from the school’s pod, it also integrates all the transaction data back to the cloud.

Carmatec proposed to develop “Raspberry Pi Application” which would be used by the pod of a school. The Raspberry Pi would be acting as the server in the school’s intranet networks. The schools would typically be in remote locations with little to no internet connectivity. The Master App would sync with the Raspberry Pi to push all educational content updates and pull all local school and student information.
Carmatec proposed to develop the back-end web application using LAMP/XAMPP framework. This LAMP/XAMPP framework is using Linux, Apache, MySQL and corePHP. Custom PHP platform with HTML as the front-end and MySQL as back-end. PHP is used to design any type of application and is scalable. It can be run on all major operating systems like Linux, UNIX, Mac OS and Windows as long as the backend server is on a LAMP

Carmatec proposed to develop “Student Android Application” which would be used by student for learning lessons and evaluating themselves through quiz. The students could log in through the given credential. When the students would log in for the first time, they would be able to view and learn -lesson 1 of level 1 of program 1 which is unlocked by default. At the end of the lesson 1, there would be a quiz which the students would need to take and clear to move to lesson 2. And at the end of all lessons, there would be a quiz which the student would require to clear to move to the next level. Also, followed by these quizzes, there would be feedback and remedial lessons. At the end of every such quiz, there would be an option for the teacher to enter passcode which is sent to them on email while adding them to application. So, every time, a student would log in and log out, the application would synchronize all the student data from android application to Raspberry Pi. This application would also have a “Sync” option; which would help the user to synchronize the data (of the newly updated schools and courses) from Raspberry Pi to the student android application.

Client details are protected under strict NDA and, therefore we do not disclose such information. However, we can provide references once you make an enquiry.

Have a project in mind?

GET A FREE QUOTE
﻿
We use cookies on our website to give you the most relevant experience by remembering your preferences and repeat visits. By clicking “ACCEPT ALL”, you consent to the use of ALL the cookies. However, you may visit "Cookie Settings" to provide a controlled consent.
Cookie SettingsREJECT ALLACCEPT ALL
Manage consent

This website uses cookies to improve your experience while you navigate through the website. Out of these, the cookies that are categorized as necessary are stored on your browser as they are essential for the working of basic functionalities of the website. We also use third-party cookies that help us analyze and understand how you use this website. These cookies will be stored in your browser only with your consent. You also have the option to opt-out of these cookies. But opting out of some of these cookies may affect your browsing experience.
Necessary Always Enabled
Necessary cookies are absolutely essential for the website to function properly. These cookies ensure basic functionalities and security features of the website, anonymously.
Functional
Functional cookies help to perform certain functionalities like sharing the content of the website on social media platforms, collect feedbacks, and other third-party features.
Performance
Performance cookies are used to understand and analyze the key performance indexes of the website which helps in delivering a better user experience for the visitors.
Analytics
Analytical cookies are used to understand how visitors interact with the website. These cookies help provide information on metrics the number of visitors, bounce rate, traffic source, etc.
Advertisement
Advertisement cookies are used to provide visitors with relevant ads and marketing campaigns. These cookies track visitors across websites and collect information to provide customized ads.
Others
Other uncategorized cookies are those that are being analyzed and have not been classified into a category as yet.
SAVE & ACCEPT